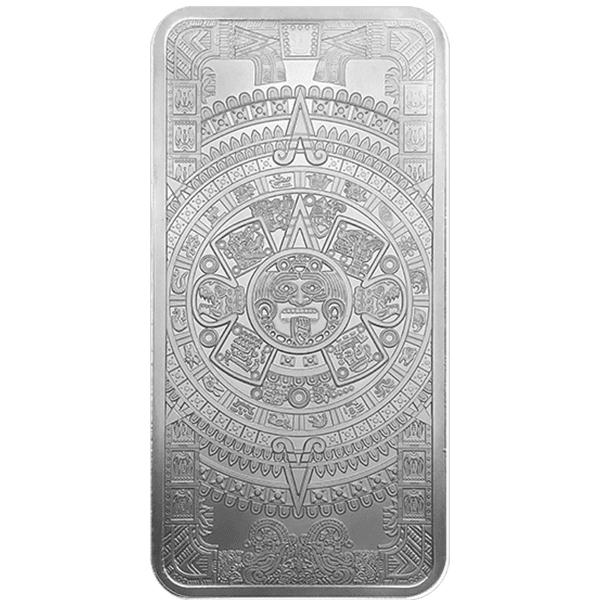 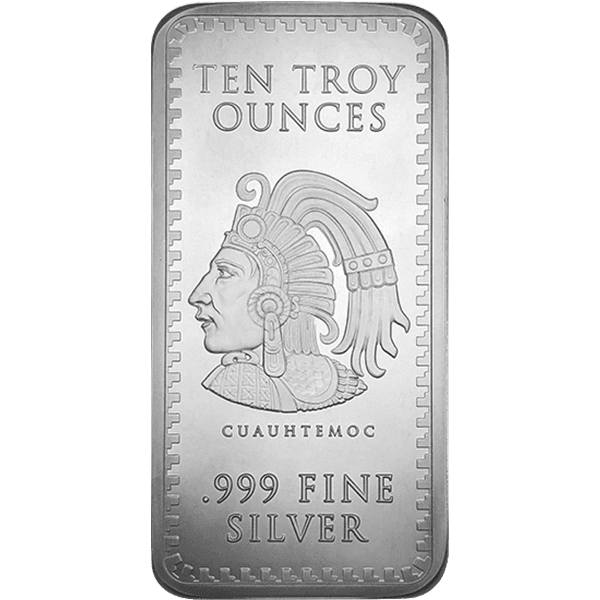 Aztec Calendar Silver Bar is 10oz .999 fine silver. This Dillon Gage offering celebrates the design found on the Aztec Sun Stone that has come to be known as the Aztec Calendar. This design is also saluted in silver and copper rounds.

The reverse of the bar has at its center the design that is depicted on the Aztec Sun Stone. This ancient “calendar” is surrounded by intricate elements of Aztec design.

The obverse displays the profile of Cuauhtemōc, who was the last Aztec Emperor of Tenochtitlan. Even though he was executed by Spanish Conquistador Hernán Cortés almost 500 years ago, his face appears on Mexican banknotes, paintings, and in modern culture. He is shown wearing the traditional headdress and jewelry of Aztec royalty. The reverse also bears the inscriptions of his name, the metal content, weight, and purity.

More on the Sun Stone

This 260-day timetable is acknowledged as the sacred Aztec calendar because it was primarily used as a divinatory tool. It was used to assign the rituals among their gods. The design, called tonalpohualli in Nahuatl, the language of the Aztecs, is a central part of their culture, as they believed that without it the world would come to an end.

The actual Aztec sun stone, which is one of the most icon pieces of this ancient society, is 141 inches in diameter and 39 inches thick, and it weighs approximately 21.8 tons.

Following the Spanish conquest, this monolith was buried in Mexico City’s main square. Then in 1790, it was rediscovered when the Mexico City Cathedral was under repair and was mounted on a wall of the Cathedral, where it remained until 1885. It is now preserved in Mexico City’s National Anthropology Museum.

There is actually another Aztec calendar called the xiuhpohualli which has 365 days. It describes the days and rituals related to the seasons, and therefor might be called the agricultural year or the solar year.