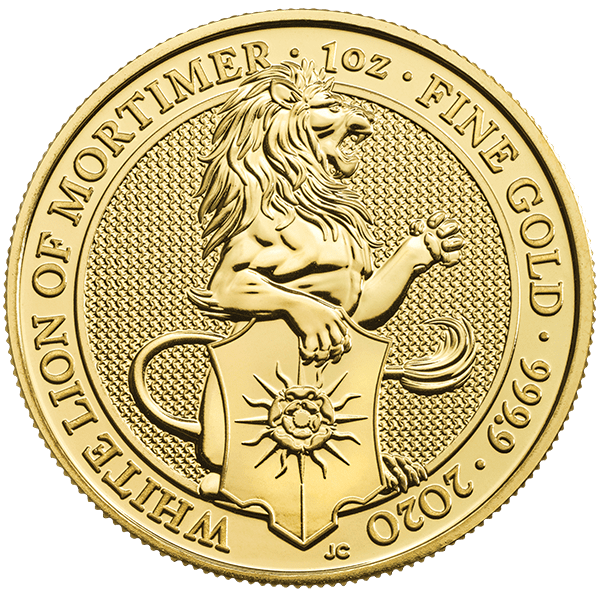 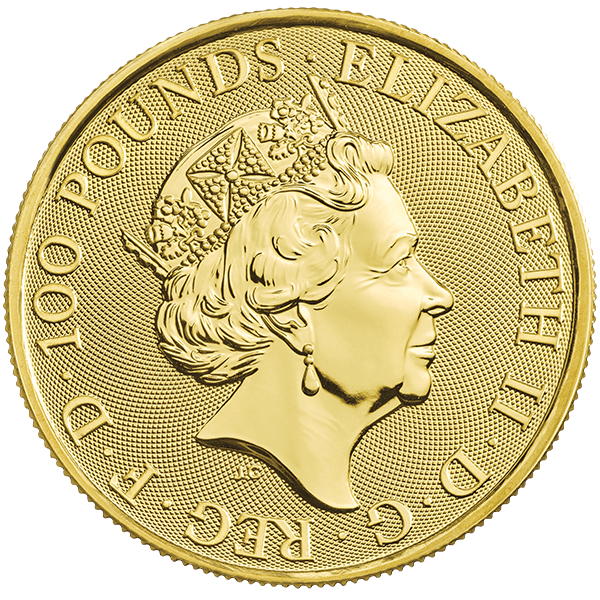 Gold White Lion of Mortimer is the eighth in the Royal Mint’s Queen’s Beasts bullion series. This detailed design is available 1 oz and 1/4 oz of .9999 fine gold and 2 oz of .9999 fine silver.

This popular 10-coin series launched in 2016 with the Lion of England design available on the Royal Mint’s first 2 oz silver bullion British coin. The series has grown to include silver as well as platinum coins.

The White Lion of Mortimer is the eighth release in the collection and the second lion to feature in this series. Unlike the fierce Lion of England, the White Lion sits uncrowned, with its tail between its legs, a pose representing loyalty and discipline. The White Lion holds a shield bearing the white rose of York combined
with the sun’s golden rays – a symbol important to Edward IV, who saw the sun as a sign of good luck in battle.

The secure, detailed chainmail background texture is a signature of this bullion collection.

The White Lion came to The Queen through her Yorkist heritage. First used by Roger Mortimer, Earl of March (1328–60), a founder Knight of the Order of the Garter, it passed to the House of York and was used by Richard II.

The inspiration for this series is the statues that adorned Westminster Abbey’s entrance for Elizabeth II’s coronation in 1953. Each statute is a real or fantasy creature that represents the heraldic beasts of the various English rulers in the Queen’s lineage. The plaster originals are now in Canada, while stone copies are displayed in Kew Gardens, outside the palm house.