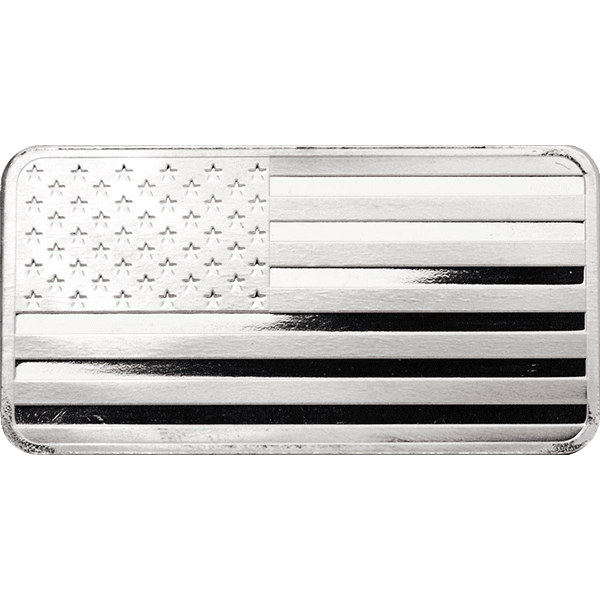 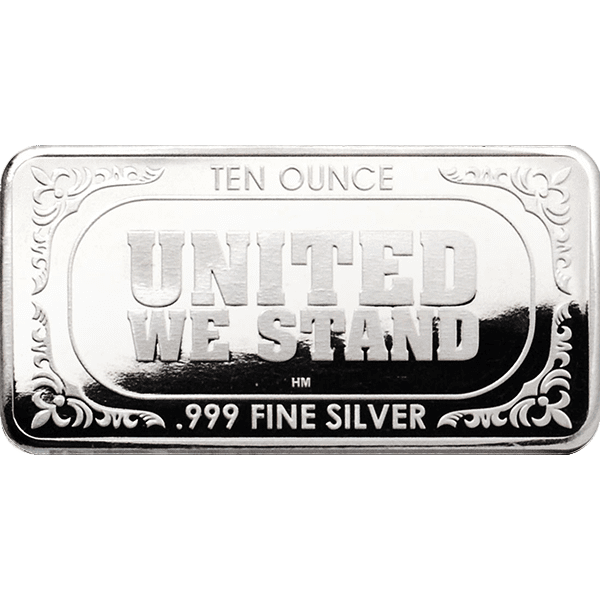 Silver Flag Bar – 10 ounce. This Dillon Gage exclusive offers a beautiful representation of the American flag and a testament to one of the country’s most hallowed sayings “United We Stand.”

The obverse of the Silver Flag Bar is dominated by the 13 stripes and 50 stars of the American Flag. This symbol of national pride is instantly recognizable around the globe, even without its iconic red, white and blue colors.

The reverse displays the fineness and weight, but primarily displays the phrase “United We Stand” framed by scrollwork.

“United We Stand” has been a part of American culture since the American Revolution. The first use of the phrase in the colonies is thought to be in the fourth verse of “The Liberty Song,” a patriotic ballad by John Dickinson. This pre-Revolutionary War song was published in the Boston Gazette in July 1768 and included the lyric: “Then join hand in hand, brave Americans all! By uniting we stand, by dividing we fall!”

Founding father and renowned orator, Patrick “Give Me Liberty, or Give me Death!” Henry, used the phrase in his last public speech, in 1799. Swaying unsteadily, Henry proclaimed, “United we stand, divided we fall. Let us not split into factions which must destroy that union upon which our existence hangs.” At the end of his speech, Henry fell into his audience and was then carried into a local tavern. He died two months later.

In World War II, the phrase gained a more global meaning as the Allies embraced the sentiment. In 1942, Queen Wilhelmina of the Netherlands addressed the U.S. Congress saying: “United we stand, and united we will achieve victory.”