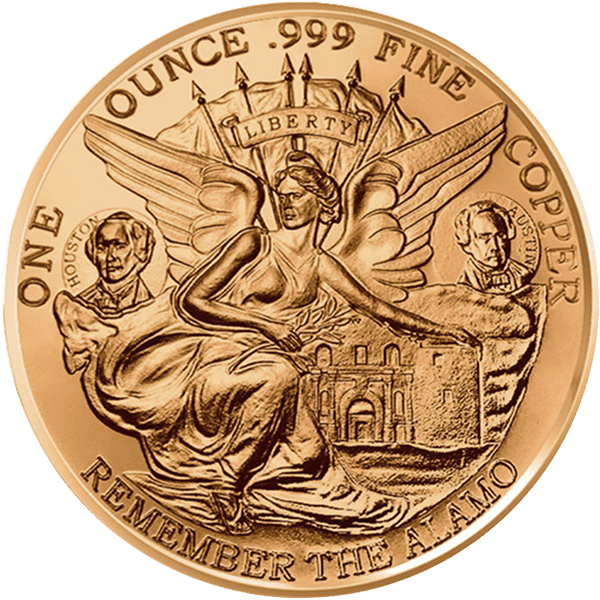 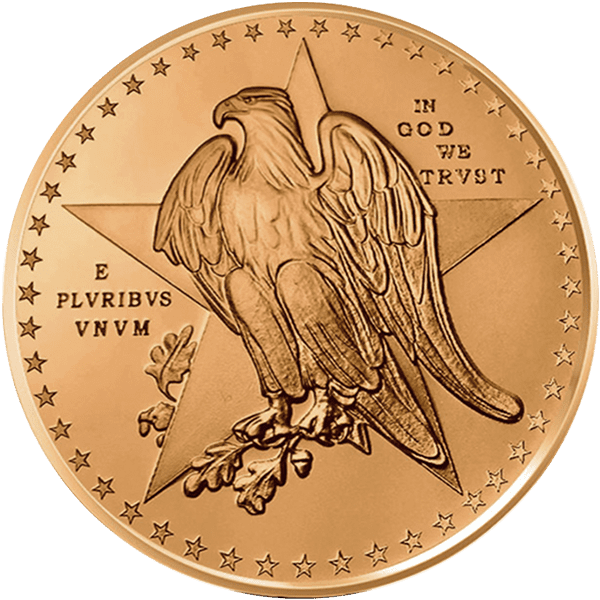 This beautiful Texas Commemorative copper round is offered to dealers exclusively by Dillon Gage. It is a recreation of the 1934-1938 Texas Centennial Half Dollar and is also available in Silver.

The motifs on both the obverse and reverse closely follow the intricate beauty of the 1934 originals.

The obverse depicts the Angel of Victory in front of the Alamo flanked by effigies of Sam Houston and Stephen F. Austin with the words “Remember the Alamo” engraved on the bottom edge. Behind the Angel are six flag staffs that represent the six flags that have flown over Texas with a “Victory” banner across them.

The reverse shows an eagle perched on an oak branch in front of a lone star with the words “E Pluribus Unum” and “In God We Trust.”

The original 1934-1938 Texas Centennial Commemorative Half Dollars of 1934-1938 are valued by numismatists and Lone Star aficionados alike. High-grade coins have sold at auction for $15,000 or more.

It was authorized by Congress in 1933 when sculptor Pompeo Coppini, an Italian-born, San Antonio resident, received the commission to design the coin. His work includes public monuments and sculptures in Austin, Waco, Huntsville, Gonzalez, Paris, and College Station.

Coppini’s aim was to incorporate as many Texas symbols into the coin as he could. It resulted in one of the most intricately-designed of all United States coins.