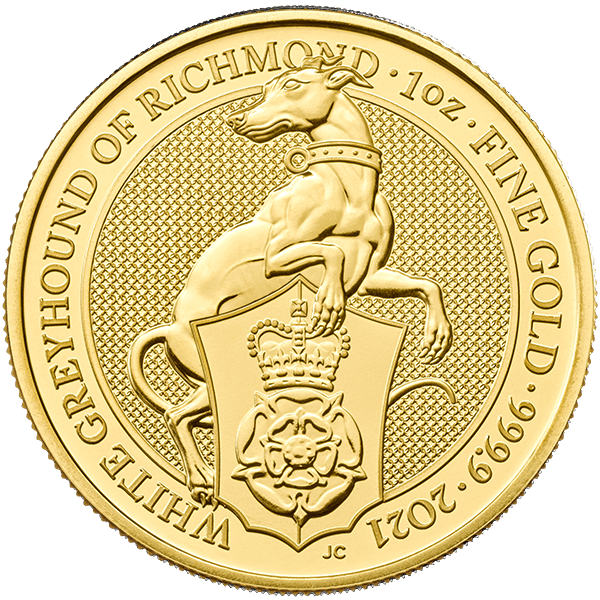 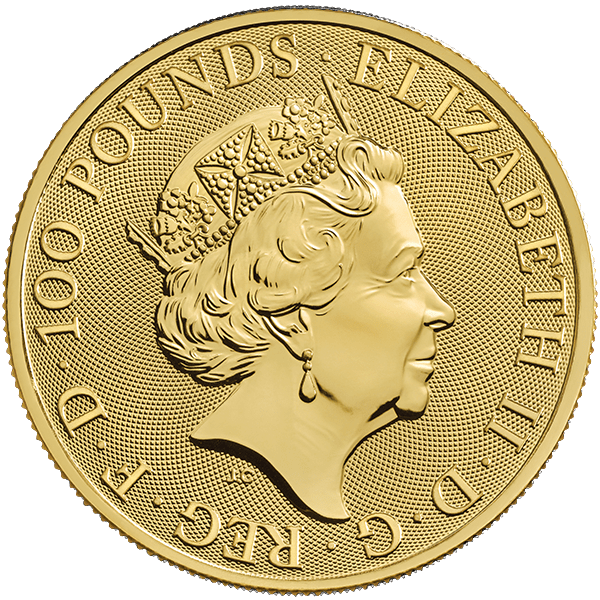 White Greyhound of Richmond is the ninth in the Royal Mint’s Queen’s Beasts bullion series. This detailed design is available 1 oz and 1/4 oz of .9999 fine gold and 2 oz of .9999 fine silver.

This popular 10-coin series launched in 2016 with the Lion of England design available on the Royal Mint’s first 2 oz silver bullion British coin. The series has grown to include silver as well as platinum coins.

The White Greyhound of Richmond appears rampant above a shield bearing the Tudor Rose topped by a crown. The secure, detailed chainmail background texture is a signature of this bullion collection.

A symbol associated with fitness, skill, faithfulness and loyalty, the greyhound was first used Edward III. While it was first closely associated with the House of Lancaster, it became a Tudor symbol when Henry VI bestowed it on Edmund Tudor, his half-brother. After slaying Richard III at the Battle of Bosworth in 1485, Edmund’s son was crowned Henry VII. He used the white greyhound to display his Tudor and Lancastrian ancestry, denoting his right to rule.

The inspiration for this series is the statues that adorned Westminster Abbey’s entrance for Elizabeth II’s coronation in 1953. Each statute is a real or fantasy creature that represents the heraldic beasts of the various English rulers in the Queen’s lineage. The plaster originals are now in Canada, while stone copies are displayed in Kew Gardens, outside the palm house.