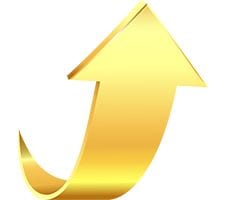 The Islamic Republic launched more than a dozen missiles at the bases in retaliation for a U.S. airstrike ordered by President Donald Trump last week that killed Qasem Soleimani, the head of Iran’s Islamic Revolutionary Guards Corps’ Quds Force unit, at Baghdad International Airport. An assessment of the strikes was under way, but CNN reported that there were no initial reports of any U.S. casualties, though there are casualties among the Iraqis.

Gold pared gains last night after Iran’s foreign minister said the country had concluded proportionate measures and wasn’t seeking an escalation or a war. Trump, in a tweet late Tuesday, said he would make a statement Wednesday morning and that, “All is well.” But news that a Ukrainian International Airlines Boeing 737 passenger jet crashed upon take-off in Iran triggered additional volatility.

Gold dropped a bit more this morning off last night’s leap after stronger-than-expected employment data was released. ADP reporting that the U.S. economy picked up 202,000 jobs in the private sector during December, strongly beating the forecasted 160,000 jobs.

February gold futures extended gains early Wednesday on Comex. Futures rose 0.4% Tuesday to settle at $1,574.30, representing a 3% rally since the initial strike on Soleimani on Friday. Gold is seen as a safe-haven asset and typically gets a boost in times of political or economic uncertainty. The yellow metal advanced 1.4% during the first two days of this week and rose 3.4% in December.

In economic news, investors are awaiting the key monthly U.S. employment report for December, which is scheduled for release Friday, and a number of Federal Reserve officials are set to speak Thursday and could provide some insight into the state of the economy.

Silver rose 1.2% Tuesday to settle at $18.39 an ounce on Comex. The March futures contract advanced 1.3% during the first two days of this week and gained 4.8% in December.

Spot palladium, a metal used primarily in autocatalysts, hit a record early Wednesday above $2,000 an ounce amid a supply crunch. It rallied 3.3% in the first two days of this week and 1.2% Tuesday. Spot platinum was up 0.8% Tuesday and is down 1.1% so far this week.