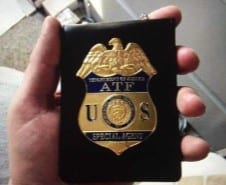 Jonathan A. Kirschner, 34, also known as “Jonathan Kratcher,” pleaded guilty before U.S. District Judge Robert B. Kugler in Camden, N.J., federal court to one count of falsely impersonating an agent of the Bureau of Alcohol, Tobacco, Firearms, and Explosives (ATF) and one count of unlawfully importing counterfeit coins and bars into the United States.

According to documents filed in the case and statements made in court:

Kirschner admitted that on May 9, 2017, he sold fake gold bars to a coin collector for $11,000 in cash. Kirschner wore an ATF badge (Shown at right) on a chain around his neck and claimed to be an ATF agent in written correspondence with the coin collector and when they met in person. Kirschner also admitted that he sold 49 counterfeit Morgan dollar coins to two people in Mt. Laurel, N.J., on June 4, 2017. Kirschner told them, “I have my badge on,” when providing descriptive information so that they could recognize Kirschner.