At the time of this report early Friday morning, the US Dollar and Treasury yields are flat as they can be, subsequently, so is the price of gold. The price of Gold has been standing still of late, building a foundation in the price.

With the absence of any significant news I expect the price of Gold to remain range bound for the time being between $1,270 and $1,300 dollars.

There are three things I will be watching: the U.S. Dollar, U.S. Treasury yields and the Equity markets. For the price of Gold to break out of the trap it is in, I expect it would take a significant move in any of the three markets I’ve mentioned. Otherwise, I just continue my wait and see posture until some significant news emerges.

Will Janet Yellen be giving her last speech as Fed Chairwoman today at the Central Banks annual meeting in Jackson Hole, Wyoming? The topic of her speech will be on financial stability and most market watchers don’t expect her to say anything of significance on the economy.

The president hasn’t given any indication of whether she will stay on or step down when her term is up in February.

I’m sure everyone has heard of the card game “Texas Hold’em”. If you will allow me to change the name to “Washington Hold’em, I’ll begin.

First let me share with you the participants at the table. 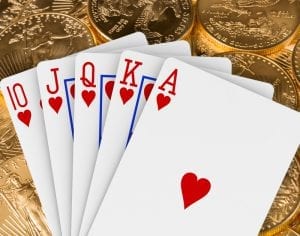 For our game, Anthony Scaramucci is both the dealer and announcer. Ok, now that we have laid out the landscape, the game begins. But, just as the game starts, an argument breaks out over who should be the first to ante up.

SCARAMUCCI: “Let’s just start the game without the anti.”

Anthony deals out two cards to each player. But just before everyone looks at their cards—

TRUMP: “I’m the President I can do whatever I want.”

For the audience looking at everyone’s cards through the TV monitor, we see that the President has a pair of aces. Paul Ryan has two Kings. Nancy Pelosi has two Queens. And the Gold market representative has an Ace of Hearts and a King of Hearts.

Up until this point, no one realizes that Chuck Schumer actually provided the deck of cards. Cleverly, on the outside of each card, Schumer has labeled them with the current legislative topics: Tax Reform, Health Care, Debt Ceiling and Infrastructure.

PELOSI: “Count me in as well…”

SCARAMUCCI: “OK, everyone’s all in, so here comes ‘the flop’.”

Scaramucci reveals the three cards on the table to the players. The cards are the Ace of Diamonds, the King of Diamonds and the Queen of Hearts.

From the audience, Chuck Schumer yells out to Pelosi to raise the President.

Scaramucci then yells out some choice words to Chuck Schumer and asks security to remove him. Schumer is escorted out by a guy wearing an “ICE“ t-shirt and the game continues.

Scaramucci deals the next card…it’s a Jack of Hearts. For the first time since the game began, no one says a word.

SCARAMUCCI: “OK, folks–here is the last card, it’s a Ten of Hearts.”

Everyone remains frozen, as no one wants to go first, but each player believes they hold the best hand.

The Gold representative realizes no one can beat his hand, yet says nothing.

SCARAMUCCI: “Come on people, someone has to show their hand.”

President Trump looks at the back of everyone’s cards and sees the four critical issues facing this nation and he simply can’t budge. Speaker Paul Ryan, not wanting to embarrass the President, also doesn’t move. And out of the blue from the audience, Hillary Clinton yells to Nancy Pelosi, “Don’t show them your hand!”

Now, maybe you can see why I changed the name of the game in the first place from Texas Hold’em to Washington Hold’em. This card game represents what Washington is doing. They’re holding all the cards—be it tax reform, healthcare, infrastructure and debt ceiling and nobody is willing to reveal their hands.

In the meantime, the markets believe this as well—because the President thinks he’s holding the winning hand. It will only be when the market realizes he can’t beat the Gold Rep’s hand that everyone will rotate their positions out of stocks and into gold. The game is over, yet we are frozen in time, with everyone hoping they have they hold the best hand. In the meantime, we all know a Royal Flush will trump the President’s hand. That will result in the Gold Rep with a Royal Flush taking the huge pot and winning the game.

Have a wonderful Friday.

Disclaimer: This editorial has been prepared by Walter Pehowich of Dillon Gage Metals. This document is for information and thought-provoking purposes only and does not purport to predict or forecast actual results. It is not, and should not be regarded as investment advice or as a recommendation regarding any particular security, commodity or course of action. Opinions expressed herein are current opinions as of the date appearing in this editorial only and are subject to change without notice and cannot be attributable to Dillon Gage. Reasonable people may disagree about the opinions expressed herein. In the event any of the assumptions used herein do not come to fruition, results are likely to vary substantially. All investments entail risks. There is no guarantee that investment strategies will achieve the desired results under all market conditions and each investor should evaluate its ability to invest for a long term especially during periods of a market downturn. No part of this editorial may be reproduced in any manner, in whole or in part, without the prior written permission of Dillon Gage Metals. This information is provided with the understanding that with respect to the opinions provided herein, that you will make your own independent decision with respect to any course of action in connection herewith and as to whether such course of action is appropriate or proper based on your own judgment, and that you are capable of understanding and assessing the merits of a course of action. You may not rely on the statements contained herein. Dillon Gage Metals shall not have any liability for any damages of any kind whatsoever relating to this editorial. You should consult your advisers with respect to these areas. By posting this editorial, you acknowledge, understand and accept this disclaimer.