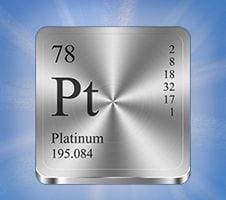 Gold and Silver’s rebound may be catching the headlines lately, but behind the scenes, platinum has also been showing new signs of life.

For decades, platinum’s winning combination of scarcity and demand boosted prices to levels far exceeding gold. But demand drivers have shifted in recent years, forcing the once-shining star to fall behind its other industrial metal peers. In this three-part series, we’ll look at how platinum is adapting to the latest technology and signs that 2019 may finally start to bring a reversal of fortune for this battered metal.

The jewelry and automotive industries still account for roughly 64% of annual demand, as the pie chart below from the World Platinum Investment Council (WPIC) shows.

Current projections from the WPIC are that overall platinum demand in 2019 will rise 9% compared to 2018. But the pie chart is shifting, with traditional demand drivers taking a back seat to new technologies. Significant changes are on the horizon for platinum in the coming years. But how?

Platinum’s greatest demand has traditionally been in the automotive industry, but it has also been the source of its recent woes. For decades, both platinum and palladium have been used in catalytic converters to help reduce polluting emissions in cars and trucks. While palladium is most used in gasoline engines, platinum works particularly well at the higher operating temperatures of diesel engines, which are 20% more efficient than average gasoline engines.

When the Volkswagen emissions scandal erupted in 2015, rising consumer demand in diesel shifted back toward gas. The price of palladium soared, and platinum struggled. But as is often the case with industrial commodities, profitability rules the day. So, as palladium prices continue to rise and supply becomes scarce, manufacturers will have more incentive to substitute it with something cheaper – and platinum is the perfect candidate.

Electric vehicles’ rise in popularity has also been a headwind for platinum. But many analysts feel that platinum’s price has been unfairly punished on this buzz. After all, the vast majority of vehicles are still made with internal combustion engines. Demand for gas and diesel-powered cars is exploding in China and India. And diesel-powered engines remain the cleanest and most affordable option amid stringent emissions regulations in places like western Europe.

Not all is lost for platinum on the clean energy front, either. There is a growing interest in Fuel Cell Electric Vehicles (FCEV) to rival hybrid and plug-in electric vehicles. Like a battery, fuel cells operate silently, contain no moving parts, and produce zero emissions. But unlike a battery, they are lightweight and can run indefinitely, eliminating the need for lengthy recharging sessions.

And in even better news for platinum investors – Fuel cell electric vehicles use more than twice the amount of platinum than internal combustion engines.

There is no greater evidence that platinum is starting to appeal to a larger pool of investors like its recent spike in investment demand. Investment demand in platinum surged 855 Koz in the first half of this year, which was driven by the largest ETF gain ever in the first quarter. This increase in holdings has not occurred since 2014, and are the highest seen in a six-month period since physically-backed platinum ETFs were launched in 2007, according to the World Platinum Investment Council’s latest quarterly report.

Stronger institutional ETF buying and the introduction of exciting new platinum coin and bar products will increase not only seasoned investor interest, but also attract new precious metals investors as we round out 2019 and head into 2020.

Platinum already enjoys growing industrial demand in the chemical refining, electrical, and petroleum industries. But researchers are increasingly finding new uses for platinum in medicine, as well. As platinum is known as a strong cancer inhibitor, next-generation platinum-containing cancer drugs and delivery systems are being introduced every year that are more effective in fighting cancer cells than traditional treatments. In fact, about 50% of cancer patients already receive treatments that include platinum. Platinum is the only metal used in pacemakers, as its inert qualities make it the perfect delivery system for treatments that penetrate the most sensitive tissue in the body. Platinum’s extraordinary physical properties make it likely that other applications will be found, leading to even more robust industrial growth in years to come.

Recent years of struggle are forcing platinum to make some healthy changes as the metal moves away from old sources of demand, secures new footholds in technology, and once again begins to garner appeal as a long-term investment. But demand is only part of the equation. The long-term outlook for platinum is also driven by pricing and supply in the marketplace. Check back tomorrow to see how platinum is positioned for growth in both areas as we head into the next decade and beyond.