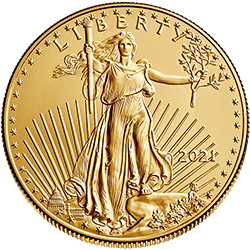 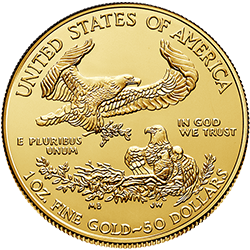 The Gold American Eagle 2021 mintage is available for pre-order now. This bullion coin is one of the U.S. Mint’s most popular. The 2021 Silver American Eagle is also available.

The Gold American Eagle will have two different reverse images during 2021. The original reverse image will remain on the Eagles that are released at the beginning of the year.

The American Eagle Gold Bullion Coins were first minted in 1986 after being authorized by the Bullion Coin Act of 1985 and is produced from gold that is newly mined from sources in America.

American Eagles use the durable 22 karat standard established for gold circulating coinage over 350 years ago. Each coin contains its full, stated weight of pure gold with the balance consisting of silver and copper, added to increase the coin’s durability.

American Eagles chief unique property is that they are the only gold bullion whose weight, content and purity are guaranteed by the United States Government. American Eagles are also valid for precious metals Individual Retirement Accounts (IRAs).

The obverse (front) design is inspired by artist Augustus Saint-Gaudens’ celebrated $20 gold piece that was minted from 1907-1933. It is considered by many to be one of America’s most beautiful coins.

The reverse was designed by sculptor Miley Busiek and depicts a male eagle carrying an olive branch as he flies over the nest of his mate and her hatchlings. 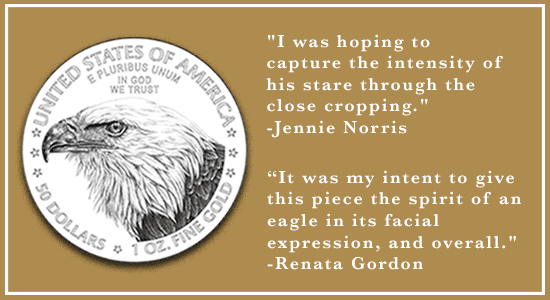 Mid-year the new reverse will be released that features a new design with the profile of an eagle. Jennie Norris from the Artistic Infusion Program (AIP) artist designed the eagle and Mint medallic artist Renata Gordon sculpted it.

According to Busiek, the design was inspired by Ronald Reagan’s acceptance speech at the Republican National Convention in 1980. The theme of his speech was ‘Together, a new beginning.’ In an interview in Coin News Today, Busiek said, “I didn’t think that anyone had ever depicted our national symbol, the American bald eagle, except as a single heraldic eagle. I liked the idea of thinking of America as a caring family, so I put together a sketch showing not just one eagle, but a whole family.”